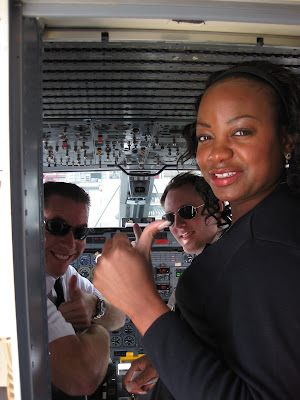 Our Fiesta training weekend started with a 12pm flight out of Medford International Airport and our pilots becoming out newest followers. The landing into Seattle, at around 3pm, was a little bumpy due to high winds, but we had some great views of the bay and city. Trying to stay on a very tight schedule we headed straight to the baggage terminal to look for the other Fiesta Movement agents and the shuttle driver to take us all to the hotel. It was pretty easy to spot the other agents because we were all walking around with video cameras and other equipment but we couldn't find our driver anywhere. After wandering around for about 20 minutes Emma finally walked up to a man who had been standing off to the side the whole time holding a sign that said "Donaldson" and asked if he knew anything about the Fiesta Movement. It turned out he was our driver and "Donaldson" was the last name of one of the agents who showed up later. After stopping briefly at the hotel we all boarded the bus to go to dinner and our first training. That evening we were given Addidas shoes, Fiesta Movement shirts, and a Webbie pocket video camera. After our scheduled events we all went out for drinks. It was fun getting to know a little about 12 other teams and the people behind Mission Control We called it a night around midnight exhausted from a full day of travel and excitement, knowing that the best was still to come.